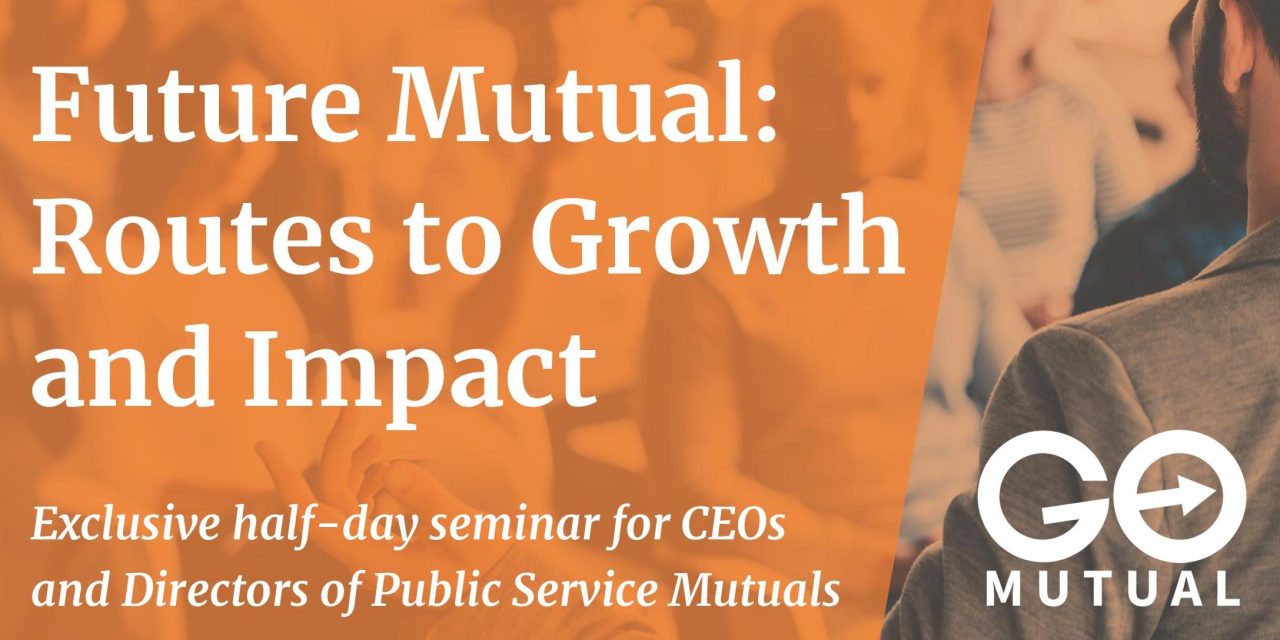 These are the questions we are addressing at our FutureMutual?: event in London on May 21st 2019.

In three words the answer to these questions is both ‘yes and no’.

Yes in that more and more firms are seeing the light on employee involvement on Boards, the latest this week being Capita which appointed two employee-directors.

Yes also in that more firms are moving to employee ownership, the latest being Richer Sounds, whose 60 year old Founder, Julian Richer, will soon be placing his shares into the hands of his employees.

But beyond that, the future isn’t that clear.  The decade began with a fanfare for employee ownership as a means to transform public ownership led by the Prime Minister, David Cameron and his most trusted lieutenants.

The last ten years has seen promising but not transformative progress, with 120 Public Service Mutuals with about £1 billion in turnover employing about 35,000 staff.

But with Brexit sucking oxygen from our political system, we end the decade with none of the clarity of purpose that was present at the beginning.  And the outlook for the 2020s can only be described as uncertain.

Many who jumped on the Mutuals train early imagined that they their ranks would be swelled by the millions of other Council and NHS workers ‘stepped out’ into independent, staff run firms.

But this just hasn’t happened at scale.  What we saw instead (perhaps predictably) was a massive growth in outsourcing to the private  sector coupled with significant growth in companies wholly owned and controlled by public sector bodies themselves.

There is cause both for concern and hope for the Public Service Mutual sector.

The worry is that as a small sector, Public Service Mutuals are invisible and therefore voiceless in the public policy debate.    This voicelessness increases the risk, for some Mutuals, of a reversal back into public ownership.

This is particularly acute in healthcare, where the NHS is now ‘renationalising’ all sorts of external provision in the name of integration of healthcare services.

Reasons to be cheerful

However, there is also room for optimism.  Outsourcing of public service to the private sector has not delivered the expected boost in quality or value.  Carillion, Four Seasons and the Probation Service have exposed the limitations of vast private sector providers of an exclusively commercial approach to public service provision.   The ‘heart’ is clearly missing.

Whitehall has been chastened by this experience and, I am reliably informed, rethinking what a more balanced approach to externalised public service delivery might look like.

A second reason for optimism is that many Public Service Mutuals have actually done rather well.  Few have folded.   Some, like Spectrum Community Healthcare CIC, have grown dramatically and thrived as independent businesses.

Others, like Thurrock Lifestyle Solutions CIC have addressed deep-lying in their communities that could never have been addressed back in the Council.

This is all despite little capital backing and relatively inexperienced management teams at the outset. Tellingly, the best Public Service Mutuals normally win comfortably against private sector competition.

Then there is the people-factor.  Employees in Mutuals seldom say they would go back into the traditional public sector.

There is something about the passion, focus and employees in these organisations that makes for productivity, flexibility and a better user experience.

But the Mutuals story has remained tucked in the middle-pages.   The critical mass isn’t there to make a splash. This is a shame because I have observed how quickly people are ‘converted’ to this approach once they see it working, whether they are politicians, staff, users or commissioners.

The sterile Parliamentary debate pitches a ridiculous vision of re-nationalisation from Corbyn-Labour versus a Pavlovian faith in the private sector from the Conservatives (though this is now changing a little).

Therefore we need now to build a positive argument among pragmatic politicians and civil servants who, frankly, are struggling to see any way forward when it comes to public services, including the NHS (which is unsustainable in its current form).

So for me, we need now an upbeat, data-driven case for Public Service Mutuals that will win both hearts and minds.

This is far better, to my mind, than a case based on the defence of the Mutuals sector against the encroachments of other sectors.

In making a positive case, it is vital that we also take a broad view of what a Public Service Mutual can be.

Because tomorrow’s Mutuals may need to look different from the plucky, standalone business competing against all-comers.  We have to contemplate how parts  of the state that are less amenable to full independence from politics (eg Children’s Social Care)  or that are tied into complex governance arrangements (NHS and care services) can also operate as mutuals.

The next generation of Public Service Mutuals, if they happen, may well look quite different from the current crop.  We have to shift with the times, as Bromley Healthcare CIC has done within its local Strategic Transformation Plan to integrate health and care services.

The future may be more or less ‘Mutual’ than it is today.  The broad thrust of public policy – co-production, collaboration and user self-help – lends itself to the types of organisations that Public Service Mutuals are and aspire to be.

The truth is that we just don’t know.  Mutuals have to go on showing how things can look while also winning the attention of a world in need of what they offer.  We need to be more vocal but also increasingly imaginative about what a Public Service Mutual in the 2020s might look like.